There are only five sports that have been at the Olympics since the very first games were held back in 1896, and fencing is one of them. This is a sport that demands anticipation, speed, mental strength, and reflexes. This sport has its roots in Europe, but the United States and China have enjoyed the most success at the recent Olympic games. Below we are going to take a closer look at this entertaining sport. 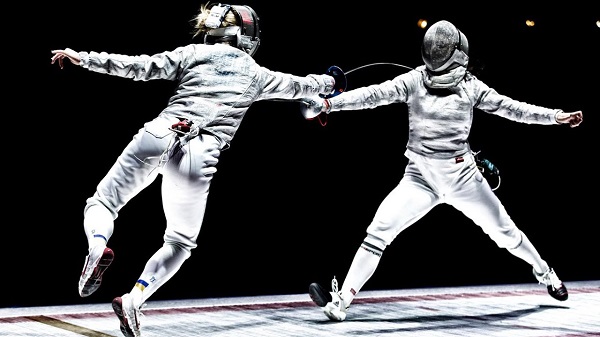 Along with the swords, there is plenty of other equipment that a fencer needs. Most of it is needed for safety, which was an area that needed urgent attention in 1980 after Vladimir Smirnov was killed at the 1982 World Championships when his opponent’s blade broke and pierced his brain through his mask. Since then, masks are subjected to stringent checks. All masks have to pass a 12-kilogram punch test, be made of stainless steel and have a carbon steel mesh. Fencers also have to wear a neck bib that is made of strong synthetic fiber such as Kevlar.

Kevlar along with nylon or tough cotton is used for all the other equipment, which is made up of a jacket, a plastron (an under-layer that stretches down the sword arm), a glove on the sword hand, short trousers that stop just above the knee, and socks. Women fencers are also required to wear chest protectors, while men can choose to wear them too if they so wish.

What about footwear? Well, fencers can wear common sports shoes that are worn by those who play handball or racket sports. The final bit of equipment is the lamé, which is the garment that allows hits to be counted. There is a body cord that attaches this garment to the sword.

The Blades That Are Used

In Olympic fencing, there are three different blades that are used. They each have different techniques, compositions, and scoring areas. We shall take a quick look at these now.

Foil: This blade has a 500 grams maximum weight and is a thrusting weapon. Only the tip of the blade counts when it comes to scoring, and the target area is the torso.

épée: Another thrusting weapon, but it has a 775 grams maximum weight. Once more, only the blade’s tip counts when scoring points, but the whole body is the target area, so there is no lame needed.

Sabre: This is a thrusting and cutting weapon and has a 500 grams maximum weight. The whole blade can be used to score points and target is the upper part of the body, which is covered by a lame, with the neck bib and face mask also having to have conducting material to count points. 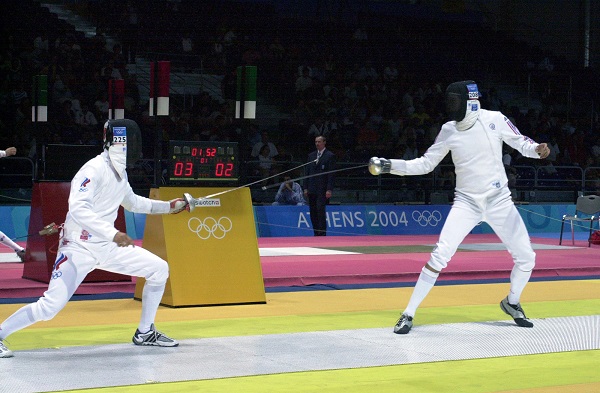 How Are Points Scored?

Hits in fencing are really hard to judge with the naked eye, so electrical scoring equipment was introduced back in 1933. When the blade (only the tip for sabre and foil) makes contact with the scoring area, an electric circuit is completed and a green or red light is triggered, depending on which fencer landed the blow.

Great balance and quick footwork are essential for this sport, both in attack and in defense. Fencing is carried out on a piste that is 1.5-2 meters wide and 14 metres long. If a fencer is forced off the piste, then a point is awarded to their opponent. The first one to hit 15 points will win.

There are three periods of three minutes each, with each period being separated by a 60 second break. You might not think that this is very long, but until you have tried fencing for yourself, you will not understand just how mentally and physically exhausting it can be.